However, despite a strong increase in sales for March 2020 as a whole, there was a clear break in market activity between the pre-COVID-19 and post-COVID-19 periods. For the purposes of this release, the start of the post-COVID-19 period was the week beginning Sunday, March 15.

• The overall March sales result was clearly driven by the first two weeks of the month. There were 4,643 sales reported in the pre-COVID-19 period, accounting for 58 per cent of total transactions and representing a 49 per cent increase compared to the first 14 days of March 2019. How would COVID-19 Impact on GTA Real Estate?

COVID-19 seems to be making a much bigger impact on Canada and the whole world this year than the SARS did in 2003.

In Canada this year so far COVID-19 has reported 2091 confirmed cases and 24 deaths, but the curve still has no sign of flattening, the numbers are still climbing. In 2003 Canada had 438 SARS cases and 44 deaths.

While our present situation is very different and it seems much worse, we may still take some lessons from the past.

While real estate is rightly a much lower concern as we worry about the health of our family, friends and fellow human beings in our communities and around the world during this unprecedented COVID-19 (Coronavirus) public health crisis, many of us are also worried about our jobs as industries face slowdown and our personal finances as stocks take a major hit.

This worry has extended to the residential real estate market.

Given this, it's worth taking a look back at the impact of the 2003 SARS crisis on real estate.

In 2003, Toronto was one of the hardest-hit cities in the world during the SARS outbreak.

The first reported case of SARS in Toronto was in February 2003 and two months later the World Health Organization (WHO) issued a travel advisory against Toronto.

By June, the WHO had lifted the travel advisory and Toronto was also officially removed from the WHO list of “Affected Areas".

So how did Toronto’s real estate market react during the first six months of 2003 of the SARS crisis and in the following six months of its immediate aftermath?

You can see from the chart below that during the first four months of 2003 the change in home sales in the Greater Toronto Area (GTA) were negative when compared to the previous year. Sales picked up slightly in May and June and by July when Toronto was no longer considered an affected area, sales surged by over 60% and remained positive for the remainder of the year. We may be likely going to see a similar trend in the GTA in the coming months, however as the COVID-19 could cause much deeper impact on the global and Canada's economy and job market, the impact could be different.

Home sales in the GTA in February were growing by over 40% compared to last year and prices were growing by just under 20%. Even if fifty percent of Toronto area home buyers step out of the market, we would still have a competitive seller’s market with roughly 2.5 months of inventory. Homes would still sell quickly but instead of getting 15 offers on their offer nights they might get 1-3 offers.

Buyers will still be out buying homes, sellers will still be selling and if we see a bit more calm and balance in Toronto’s real estate market as a result of the Coronavirus, that’s not a bad thing - though, of course, not worth the heartbreaking loss of life.

Take care of yourselves and each other and stay well. Thinking of selling but not sure how to manage your selling in this difficult situation? Please call Peter He at 647-7392618 for an obligation free consultation. Greater Toronto Area REALTORS® reported 7,256 residential transactions through TRREB’s MLS® System in February 2020, representing a 45.6 per cent increase compared to a 10-year sales low in February 2019. However, February 2020 sales were still below the 2017 record result. Year-over-year sales growth, for the GTA as a whole, was strongest for ground-oriented home types.

New listings amounted to 10,613 in February 2020, a 7.9 per cent increase compared to February 2019. This moderate annual growth rate was much smaller than that reported for sales, which means market conditions tightened considerably over the past year.

As market conditions tightened over the past year, competition between buyers has clearly increased. This resulted in a further acceleration in year-over-year price growth in February. The MLS® Home Price Index Composite Benchmark was up by 10.2 per cent. The average selling price for all home types combined was up by 16.7 per cent to $910,290. Double-digit average price growth was experienced for most major market segments, including detached houses and condominium apartments. “We started 2020 where 2019 left off, with very strong growth in the number of sales up against a continued dip in the number of new and available listings. Tighter market conditions compared to a year ago resulted in much stronger growth in average selling prices. Steady population growth, low unemployment and low borrowing costs continued to underpin substantial competition between buyers in all major market segments,” said Mr. Collins.

The MLS® HPI Composite Benchmark price was up by 8.7 per cent compared to January 2019 – the highest annual rate of growth for the Benchmark since October 2017. The condominium apartment market segment continued to lead the way in terms of MLS HPI® price growth, but all home types experienced price growth above seven per cent when considering the TRREB market area as a whole. The average selling price in January was up by 12.3 per cent, driven by the detached and condominium apartment segments in the City of Toronto.

“A key difference in the price growth story in January 2020 compared to January 2019 was in the low-rise market segments, particularly with regard to detached houses. A year seems to have made a big difference. It is clear that many buyers who were on the sidelines due to the OSFI stress test are moving back into the market, driving very strong year-over-year sales growth in the detached segment. Strong sales up against a constrained supply continues to result in an accelerating rate of price growth,” said Jason Mercer, TRREB’s Director of Market Analysis and Service Channels.

Toronto Real Estate Board President Michael Collins reported that December 2019 residential sales reported through TREB's MLS® System by Greater Toronto Area REALTORS® were up by 17.4 per cent year-over-year to 4,399. Total sales for calendar year 2019 amounted to 87,825 – up by 12.6 per cent compared to the decade low 78,015 sales reported in 2018. On an annual basis, 2019 sales were in line with the median annual sales result for the past decade.

While sales were up in 2019, the number of new listings entered into TREB's MLS® System was down by 2.4 per cent year-over-year. For the past decade, annual new listings have been largely in a holding pattern between 150,000 and 160,000, despite the upward trend in home prices over the same period."We certainly saw a recovery in sales activity in 2019, particularly in the second half of the year. As anticipated, many home buyers who were initially on the sidelines moved back into the market place starting in the spring. Buyer confidence was buoyed by a strong regional economy and declining contract mortgage rates over the course of the year," said Mr. Collins.

"Over the last ten years, TREB has been drawing attention to the housing supply issue in the GTA. Increasingly, policy makers, research groups of varying scope and other interested parties have acknowledged that the lack of a diverse supply of ownership and rental housing continues to hamper housing affordability in the GTA. Taking 2019 as an example, we experienced a strong sales increase up against a decline in supply. Tighter market conditions translated into accelerating price growth. Expect further acceleration in 2020 if there is no relief on the supply front," said Jason Mercer, TREB's Chief Market Analyst. October 3, 2019 -- Toronto Real Estate Board President Michael Collins announced that Greater Toronto Area REALTORS® reported 7,825 sales through TREB's MLS® System in September 2019. This result represented strong year-over-year sales growth of 22 per cent compared to 6,414 sales reported in September 2018. It is important to note, however, that sales remain well-below the record September 2016 peak of more than 9,800 sales.

The supply of listings continued to be a concern in September 2019, with new listings down by 1.9 per cent year-over-year to 15,611. We have experienced multiple months this year wherein the annual rate of sales growth outpaced the annual rate of new listings growth, resulting in the overall number of active listings at month-end being well-below last year's levels. This speaks to tightening market conditions and an accelerating annual rate of price growth.On a preliminary seasonally adjusted basis, the September 2019 sales level remained in virtually the same as the August 2019 result.

The annual rate of price growth in September reached the highest point so far in 2019. The MLS® Home Price Index (HPI) Composite Benchmark was up by 5.2 per cent on a year-over-year basis in September. The average selling price for all home types combined was up by a similar annual rate of 5.8 per cent to $843,115.

On a preliminary seasonally adjusted basis, the September 2019 average selling price was up by 1.2 per cent compared to August 2019.

Toronto Real Estate Board President Michael Collins announced that Greater Toronto Area REALTORS® reported 7,711 residential sales through TREB's MLS® System in August 2019. This result represented a 13.4 per cent increase compared to 6,797 sales reported in August 2018. On a monthover- month basis, after preliminary seasonal adjustment, sales were up by 0.8 per cent.

Market conditions also became tighter in August 2019 compared to a year ago because, while sales were up year-over-year, new listings were down by three per cent over the same time period to 11,789. Year-to-date, growth in sales has well outstripped growth in new listings. This is why overall active listings counted at the end of August were down by more than 11 per cent compared to August 2018.GTA-wide sales were up on a year-over-year basis for all major market segments, with annual rates of sales growth strongest for low-rise home types including detached houses. This reflects the fact that demand for more expensive home types was very low in 2018 and has rebounded to a certain degree in 2019, albeit not back to the record levels experienced in 2016 and the first quarter of 2017.

The MLS® Home Price Index Composite Benchmark for August 2019 was up by 4.9 per cent on a year-over-year basis. The average selling price, at $792,611 in August 2019, was up by 3.6 per cent year-over-year. Both the MLS® HPI benchmark prices and average selling prices were up on an annual basis for major market segments. The condominium apartment segment continued to lead the way in terms of price growth, followed by higher density low-rise home types and finally detached houses.

GTA Market Watch by the Numbers(July 2019) 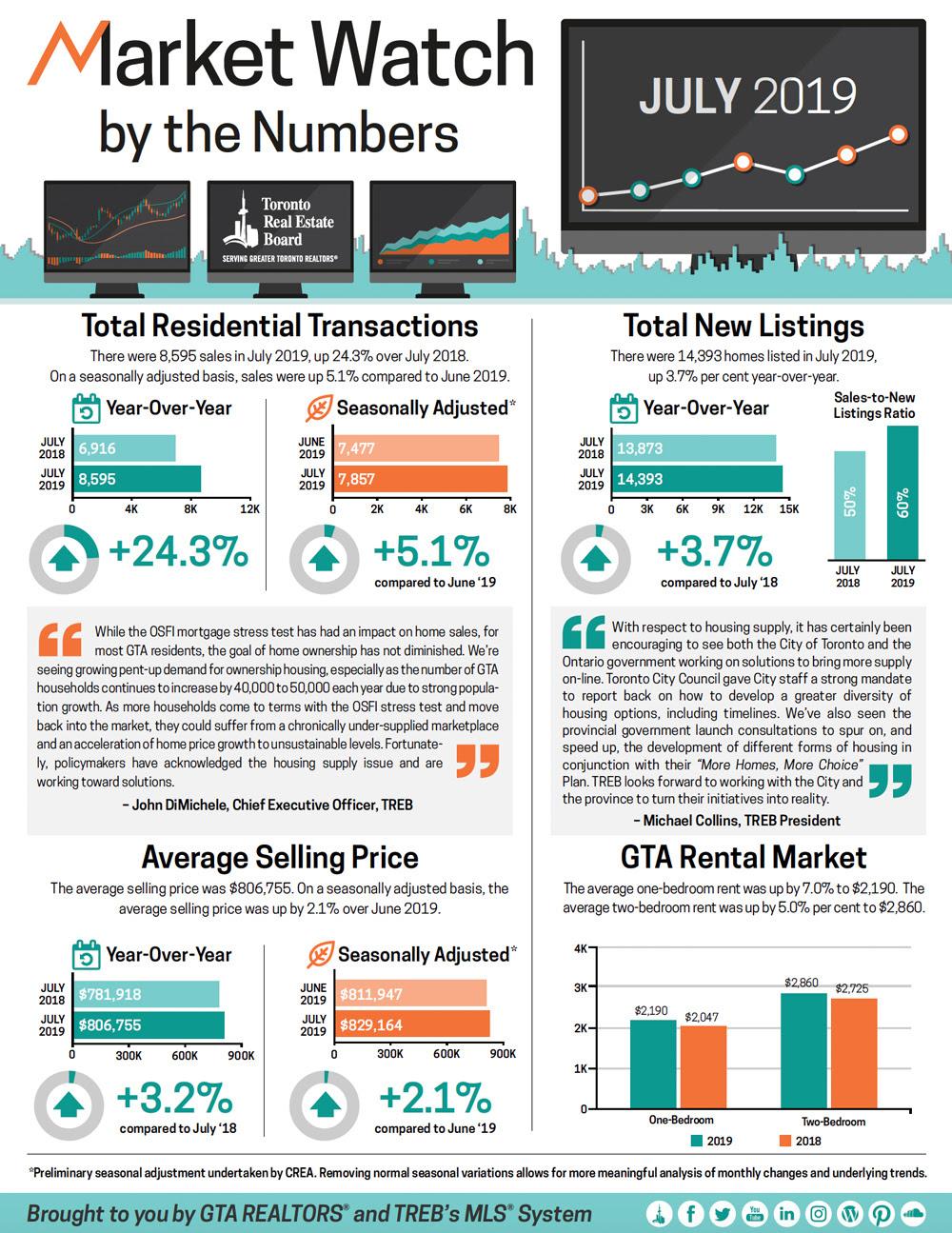 GTA Market Watch by the Numbers(June 2019) 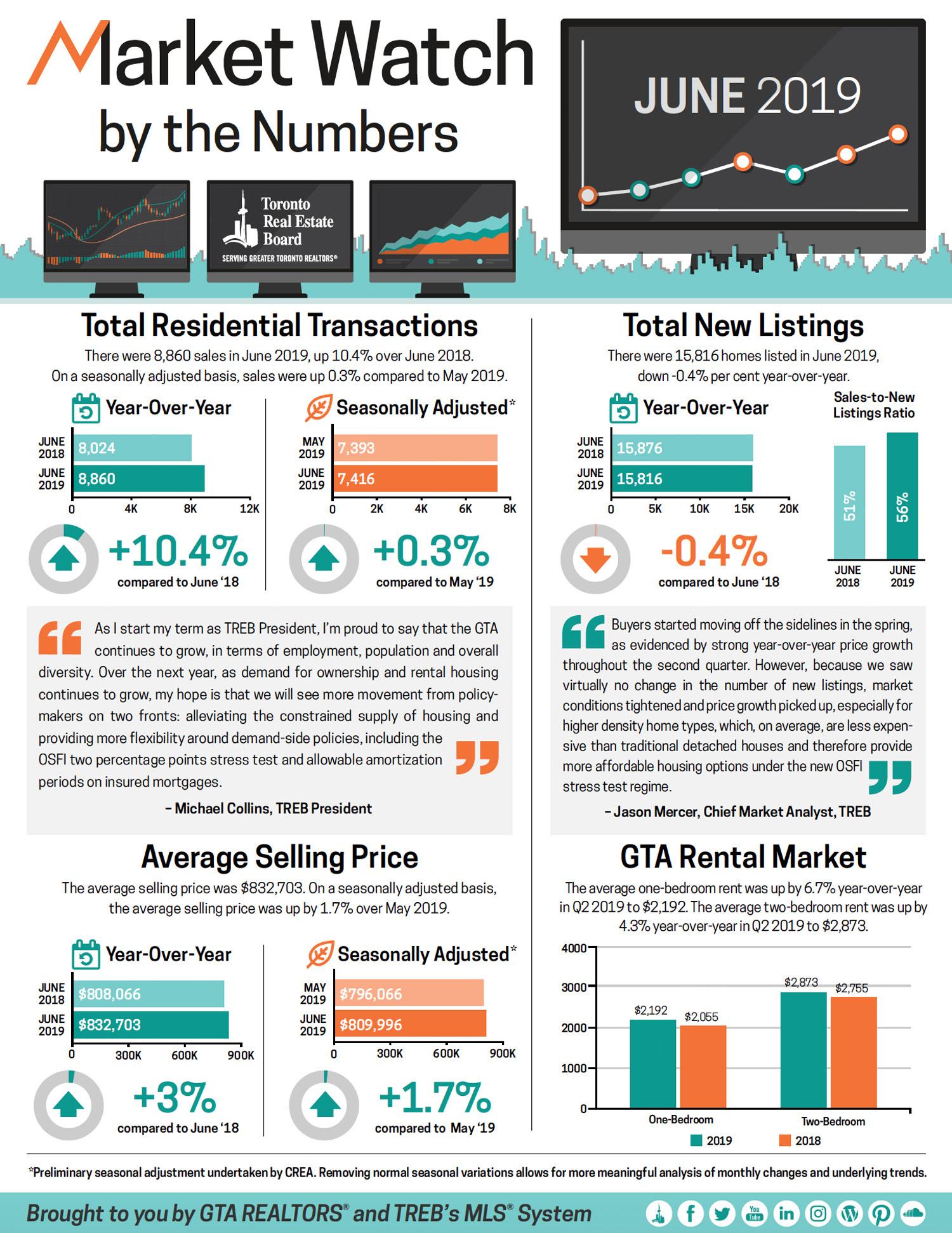 Tweet
Privacy Policy | Disclaimer
All information displayed is believed to be accurate, but is not guaranteed and should be independently verified. No warranties or representations of any kind are made with respect to the accuracy of such information. Not intended to solicit buyers or sellers, landlords or tenants currently under contract. The trademarks REALTOR®, REALTORS® and the REALTOR® logo are controlled by The Canadian Real Estate Association (CREA) and identify real estate professionals who are members of CREA. The trademarks MLS®, Multiple Listing Service® and the associated logos are owned by CREA and identify the quality of services provided by real estate professionals who are members of CREA.
REALTOR® contact information provided to facilitate inquiries from consumers interested in Real Estate services. Please do not contact the website owner with unsolicited commercial offers.