10月24日，加拿大央行如同普遍预期再次宣布加息0.25%。这个加息究竟对屋主们有多大影响呢？笔者算了一下，每贷款一百万加元，加息0.25%意味着每月多付$134加元利息。如果您的贷款是固定利率，直到您续贷款时才会有影响。如果您选择的是浮动利率，一般而言你的月供款也不会马上有变，但是所还的钱里会有$134用于还利息，而本金少还$134加元。
不过大家也不必恐慌，即使再加几次利息，目前加拿大利率水平在过去80年历史上看仍然处于历史低位，目前加拿大利率仍然比其他多数国家更低。
What does 0.25% interest rate hike mean to you? For every 1 million dollar mortgage, you are going to pay $134 more on interests every month...
But don't be freaked out, look at the past 80 years, even with a few rate hikes the current rates are still at a historically low level...
For those of you who are under fixed rates terms, your mortgage payment won't be affected until renewal. For the variable rate terms, your monthly payment amount would still not change but more payments would be made to interests instead of principle... 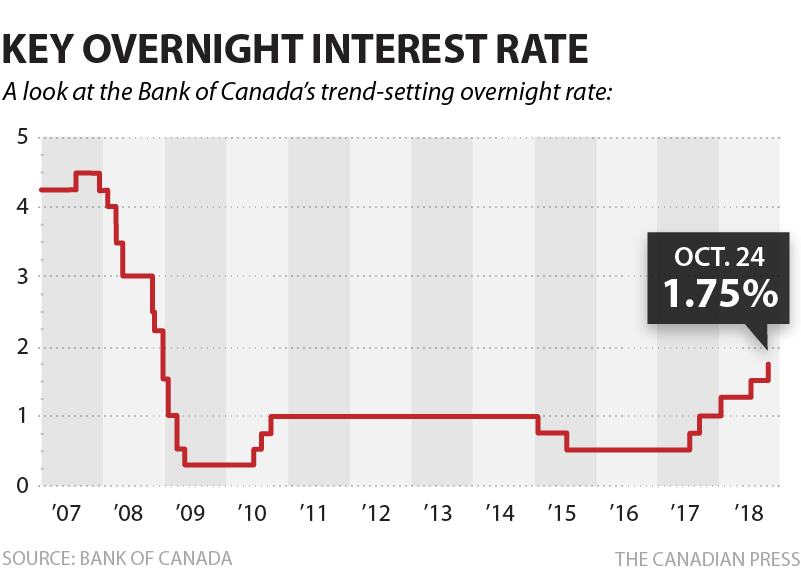 The Bank of Canada has raised its benchmark interest rate by a quarter point for the fifth time since last summer, pushing up the cost of borrowing for Canadians.

Known as the target for the overnight rate, the benchmark is what Canada's big banks charge each other for short-term loans. It filters down to consumers, because it affects the rates the banks offer their customers for things like variable rate mortgages and savings accounts.

Canada's central bank kept its interest rate at record lows for several years to stimulate the economy following the economic slowdown of 2008, but has since begun to ratchet it higher as the economy gets back on sounder footing.

Economists are expecting a few more rate hikes to come, but the bank hinted on Wednesday that it wants to see how current rates are affecting the economy before proceeding.

"In determining the appropriate pace of rate increases, [the bank] will continue to take into account how the economy is adjusting to higher interest rates, given the elevated level of household debt," the bank said.

In explaining its decision to raise the rate, the bank noted the recently announced free trade deal with the United States and Mexico as a reason for optimism about Canada's economy.

The bank also said it expects household spending to increase at "a healthy pace."

Candice Bangsund, a portfolio manager at investment firm Fiera Capital interpreted the bank's statement as a clear sign it has very strong confidence in the outlook for the economy — which means rate hikes to come.

"The bank's constructive and upbeat tone in the statement is not all that surprising given that the economy is operating near full capacity and core inflation is hovering around target, while trade tensions have receded substantially following the successful renegotiation of NAFTA," she said.

The bank meets eight times a year to set its interest rate, and its next such meeting is scheduled in six weeks on Dec. 5.

Trading in investments known as overnight index swaps currently implies that investors think there's about a 25 per cent chance of another rate hike on that day. But regardless of what happens then, investors are expecting two more hikes between now and March, bringing the bank's rate to 2.25 per cent.

Currency investors clearly see more rate hikes to come, as the loonie gained half a cent as soon as the decision came out. (Rate hikes push up the value of a currency, because they make it more worthwhile to invest in the country's money.)

The loonie was changing hands at just under 77 cents on Wednesday morning, its highest level in a week. Tweet
隐私政策 | 免责声明 | 网站使用条款与条件
All information displayed is believed to be accurate, but is not guaranteed and should be independently verified. No warranties or representations of any kind are made with respect to the accuracy of such information. Not intended to solicit buyers or sellers, landlords or tenants currently under contract. The trademarks REALTOR®, REALTORS® and the REALTOR® logo are controlled by The Canadian Real Estate Association (CREA) and identify real estate professionals who are members of CREA. The trademarks MLS®, Multiple Listing Service® and the associated logos are owned by CREA and identify the quality of services provided by real estate professionals who are members of CREA.
REALTOR® contact information provided to facilitate inquiries from consumers interested in Real Estate services. Please do not contact the website owner with unsolicited commercial offers.